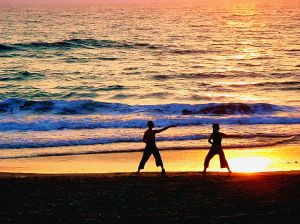 At its core, Tai Chi has its origins in Taoism, Confucianism, Buddhism and Martial Arts. This form of movement, though so prominent, has an undefined origin. The most concrete evidence of its historical existence and significance that scholars have been able to amass is in the texts of legendary tales. This is hardly practical information. Tai Chi Chuan means, “Supreme Ultimate Boxing.” Broken down, it translates to Tai Chi (the source, the beginning) and Chuan (fist, or boxing). The practice spread to the United States in the 1930’s and 40’s. Yang Chengfu has been credited with the original champion of the form in America. He spread TaiChi throughout the northeast, until it spread further, through other teachers, in the 90’s.

It can be said that Tai Chi Chuan, as it was originally conceived, contains a sophisticated method of fighting based on the reconciliation of dynamically interacting forces. Structurally speaking, think of the formlessness of water. The Tai Chi Chuan practitioner seeks to neutralize his opponent’s use of force before applying a countering force of his own. There is a constant shifting of power and control, often times creating a situation where the power of the opponent is used against them. In this give and take, this interplay of energies, Tai Chi finds its highest expression.

Tai Chi is used to “fight” fatigue, stress, overwork, or lack of understanding of oneself and one’s body. The practice of Tai Chi has many benefits to our bodies and our minds and in fact, is used to help keep stress from killing or injuring us. It promotes mental clarity, assists with balance, helps the circulation of the ch’i and the blood, combats fatigue and insomnia, improves breath capacity and ultimately, helps in increasing longevity. It has been quoted that Tai Chi is meditation in action; the metaphysics of the Mahayana (Buddhist Philosophies) expressed not in words, but through symbolic movements and gestures.