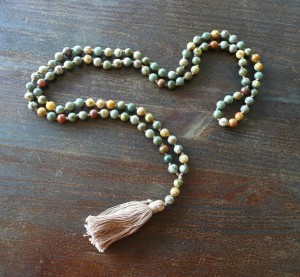 Malas, or jap mala, are Buddhist prayer beads that were first developed as a religious counting tool. Most malas consist of 108 beads, or sometimes other numbers usually divisible by 9.

The beads are used for keeping count while reciting, chanting, or mentally repeating a mantra or the name of a deity. Mantras are typically repeated hundreds or even thousands of times. The mala is used so that one can focus on the meaning or sound of the mantra rather than counting its repetitions.

Hindu tradition holds that the correct way to use a mala is with the right hand, with the thumb flicking one bead to the next, and with the mala draped over the middle finger. The index finger represents ego, the greatest impediment to self-realization, so it is considered best avoided when chanting on a mala.

In northeast India, particularly those in the Shakta traditions in West Bengal and Assam, the mala is often draped on the ring finger of the right hand, with beads moved by the middle finger with aid of the thumb and avoiding the use of the index finger. However, draping the mala over the middle finger and using the thumb to move the beads is also acceptable in these regions.

The 109th bead on a mala is called the sumeru, bindu, stupa, or guru bead. Counting should always begin with a bead next to the sumeru. In the Hindu Vedic tradition, if more than one mala of repetitions is to be done, one changes directions when reaching the sumeru rather than crossing it. Traditionally, you should never cross the meru or “guru” bead. The mala should be turned in such a way that the 109th mantra is counted on the bead in which the 107th mantra was registered.

In these eclectic days when we’re all inspired by each other and trying new things, many people use them as spiritual jewelry and sometimes combine them with crystal energy work. This is can lead people into a deep spiritual practice.